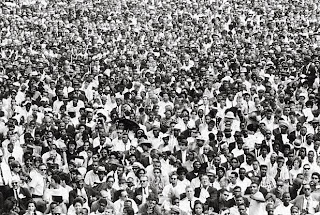 Why isn't anyone talking about the March on Washington, or am I the only one not in the loop? 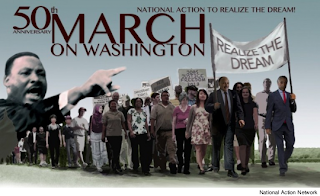 I find it strange. The 50th Anniversary of one of the greatest human rights events in history is approaching, but no one seems to be talking about it. At least I'm not hearing or reading about it. I know it's coming because the event is the back drop for the opening of my book,  La Rose Book I Le Baton Chronicles. Granted, I don't have cable, but anyone who follows me on Twitter knows that I keep up with my news outlets. I haven't seen anything on CNN, Reuters, MSNBC, or FOX websites. If they posted something, I missed it.

But maybe it's just me. I don't catch everything on the internet.

OK, so maybe it is just me. However, since we're getting closer to the walk, I'm guessing there will be more buzz about it. But gee whiz, maybe some folks may have wished to attend in person. Now we're under seven days before travel; plane tickets will cost a fortune.

I think that we, as a nation (me too), have been more focused on other things, like the hottest song in the country, celebrities babies, political sex scandals and petroleum selected foreign wars and unrest. Who wants to discuss equality, voting rights, jobs or our children murdering each other? Something may change in the world if we did and who wants that? Better keep it under our hats.

But yeah, there will be a March in Washington on Wednesday, August 28th. Please visit http://50thanniversarymarchonwashington.com/ for more information and a schedule of events.
Posted by LaFleur2009 at 11:59 AM No comments:

I'm on Tumblr now. It seems cool; I'm still getting my feet wet though. Want to follow me? You may be able blame me for something later if you do. Ha!

On Wednesday, August 28, 2013 America will celebrate the 50th Anniversary of the March on Washington, forever altering the course of American History. Although many may believe the March to be the brainchild of Dr. King and the Southern Christian Leadership Council (at least I had), it was organized by A. Philip Randolph, leader of the Brotherhood of Sleeping Car Porters and political activist.

Growing up in the 70's, I always fantasied what the March must have been like for those fortunate enough to attend. I have missed major events in my adulthood, such as the President Obama's inaugurations, due to either financial limitations or obligations at home. In my novel La Rose, Book I Le Baton Chronicles, 24 year old Julian Charles Chamberie also suffers the same misfortune. An activist in the Civil Rights Movement, Julian is summoned home to New Orleans by his 116 year old Great-Grandmother Lela Chevalier Roberts on the eve of the March on Washington. Although furious with his grandmother's request, Julian skips the March and returns home to visit her once more, expecting her to die soon.

As the March on Washington challenged the collective conscience of America, Lela  challenges Julian.  In preparation for his end time role as the Keyholder, Lela transports Julian through time and space to the La Rose Plantation in 19th century Louisiana,  reacquainting Julian with his life as Lela's father and slave owner, Augustus Chevalier. Lela captivates Julian's mind, soul, and spirit with her oral narration of the story, compelling Julian to examine his own inner turmoil, wounds, and strongholds which have dogged him across several lifetimes. Yet, Lela not only wishes for Julian to come to terms with his past life, but to learn how deal with the Archangels and Fallen angels who have battled for control of him throughout the centuries, and who continue to do so,  seeking take hold of the Chevalier Family for all time. With her account of their family history, Lela offers to Julian the opportunity to take hold of his true purpose in life and his freedom.

If you wish to learn more about the March on Washington and upcoming events commemorating the 50th anniversary of the March, please visit http://50thanniversarymarchonwashington.com/events/.

La Rose, Book I Le Baton Chronicles is available on Amazon.com.
Posted by LaFleur2009 at 5:32 PM No comments:

Social Media is now my second job; writing is my third.

My schedule, you may ask?

I'm learning how to manage it all. I love Twitter. FB is OK. Instagram and Picasa I'm still learning. LinkedIn is cool. Not sure what Pintrest is all about? I guess it's like Picasa and Instagram? Ugh. Google +, I'm still figuring that one out too.

I downloaded something called Pocket (formerly Read It Later) to my IPad. It sounds cool. You can save articles, etc to Pocket and read at your convenience.

Buffer is an app that reveals peak hours/times when your followers are line. This will be great once I learn how to use it.

TweetCaster is an interface for Twitter. I like it. Tweets come in lightning quick, shiny front end. You can get stats on everything! Cool.

Do you have any tips on how you manage your social media activities? I would love to here them.

Here are some links if you would like to learn more about the apps I've discovered: